Efficiently managing your people, teams, vehicles, and, generally all resources, is a key to success. Overuse exhausts people and equipment. Under use does the opposite and costs you money by not getting the most out of your resources. Our fleet management system, specifically our routing subsystem, has an easy to use tool to help with this analysis and improve the utilization of your vehicles and assets.

Optimizing your routes is not an optional task. With a little work, real results that add measurable value to your business can be achieved. The end result of optimizing driver routes and stops, is that you can free up resources: from employees to vehicles, minimize mileage related expenses, improve on time performance and ultimate lower your overall expenses.

Our routing subsystem can help you look a driver's route and determine how to optimize that specific set of stops. Easily swapping stops and generating new routes. You can also compare routes for mileage and distance as well as overlap with other routes. Allowing you to identify when one route overlaps with another individual's to shake out stops that might be a stretch for one driver's route and a perfect fit in another's. Optimizing is an iterative process and you might have to move around stops and repeat.

Optimize Routing for a Vehicle

Optimizing one vehicle's route is classically called the traveling salesman problem. Defined by Wikipedia as: "Given a list of cities and the distances between each pair of cities, what is the shortest possible route that visits each city and returns to the origin city?". The math behind this question grows as the number of stops increases and has been the subject of numerous scientific papers. All that is interesting, but what about your business and your vehicles? How do you get them moving in efficient routes? You don't need a PhD, that's for sure, just some our software and a cup of coffee.

We've built the routing system so you can easily enter start and end points based on a vehicle's location, a landmark or an address. You can then add stops to the route. And, you can choose to optimize the stops or take them in the order that you entered them. If you want to specify the order of some stops, and allow Google to optimize the order of other stops, you'll have to break your route into multiple routes.

As an example, here's a route in Boca Raton, it starts at a gas station at 1655 N Federal Hwy, Boca Raton, FL 33432, ends at the Towne Center Mall at 6000 Glades Rd, Boca Raton, FL 33431. We've added in 5 stops: the YMCA, a restaurant, a school and the local hospital. And we ran routing across this definition with and without optimization.

Once the start, stop and interim stops are entered, with a little help from Google, we'll show you on the map the efficient routing or the as-entered route. And, in either case, we'll provide detailed turn-by-turn directions. You'll then have the option to name and save your Route. If you save the route, it will be available for the second problem we referred to: optimizing the team.

The results of optimizing the route, over taking it as entered are telling. Without thinking about the order, we defined one route as a 15 mile, 45 minute tour of Boca Raton, Florida. But, with a little typing, a few clicks, we've generated an optimized route that shaves off 5 miles and 15 minutes of time. Simplistic example? Sure, but if a small simple example gives that kind of savings, what can you get out of a bigger, more complicated question.

A Route In Boca Raton - Not Optimized 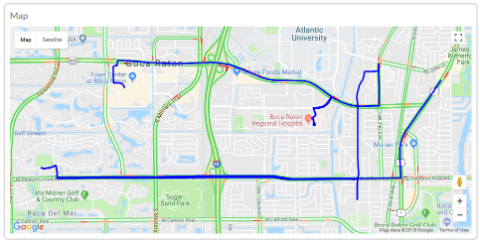 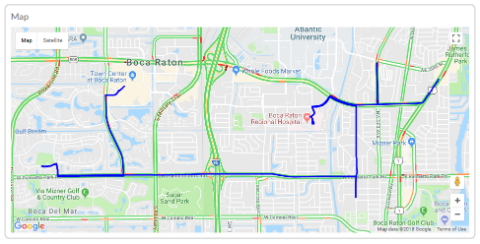 Doing the Math: Shaves off 5 miles and 15 minutes of time!

Optimizing your routes is an exercise that can identify inefficiencies, save your drivers time, and free up resources (vehicles, drivers). It's not a hard task, but it is a necessary tasks. Some customers find themselves reviewing routes regularly and others do it less often. That's something each business owner needs to decide for themselves. But its clear that there is payback for nearly every customer.